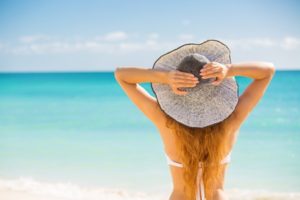 CellQuest has developed a dual purpose product primarily to defend against sunburn before it happens and soothe and assist healing after it happens.

Sunburns are the reaction of the body to the direct damage of cellular DNA resulting from the excitation of DNA by UV-B light photons. The resultant formation of a thymine dimer triggers several defensive mechanisms, including DNA repair to reverse the damage and generate more melanin to prevent future occurrences.  Melanin also reduces the generation of free radicals in minimizing the impact to both direct (nuclear) and indirect (mitochondrial) DNA.

THE GOOD AND BAD EFFECTS OF ULTRAVIOLET LIGHT

Ultra violet light provides the benefit of generating vitamin D3, essential for good health without the risk of overdose.  This natural process balances the concentrations of this essential vitamin and prevents associated toxicity. Unfortunately, ultra violet light also contributes to the premature aging of skin. It becomes an issue of too much or too little. Too little sunlight will result in the need for vitamin D supplementation with the risk of overdosing. Too much sunlight will result in sunburn and premature aging of skin.  During the “initial interval” in exposure to solar rays, nature affords a means of optimizing the benefits, while reducing the downside. Unfortunately, it is a relatively short window, which must be carefully managed.  It is not a definite time period for each individual and varies from a low of about five minutes to thirty minutes depending on skin type. This short period of exposure to solar rays allows the natural generation of vitamin D while sunburn effects are offset by the body’s own defense system converting the early photons into harmless heat before DNA damage occurs.  Following this initial stage, protective clothing generally appears to be the most effective way of avoiding the damaging effects of ultra violet light. Alternatively, the frequent application of sunscreens and sun-blockers will afford adequate protection with some carcinogen risk issues causing concern.  Ideally, a sensible combination of letting light in and keeping it out proportionally should provide the best outcome. Identifying a safe and effective combination becomes the best option in daily activities.

The Before and After Sun product has been reported by users to defend against sunburn even though its sun protection factor (SPF) is almost non-existent at 1.6. It appears to allow ultraviolet rays to enter the skin without associated burns. Of course it must be applied frequently according to skin type on a customized trial basis.

To identify the apparent photon defense property of the product, the company has begun a laboratory investigative program to determine the physiological mechanisms involved. Many believe in keeping harmful UV light out with clothing, sun blocks and sunscreens. When faithfully followed, this practice is recommended in preventing sunburns but the downside is the need for vitamin D3 supplementation as distinct from the better option of utilizing the natural solar source. Additionally, the carcinogenic risks of sun-blocks and sunscreens are being actively debated in scientific circles. It is estimated that less than 0.1% of UV- B photons entering the skin cause direct DNA damage and consequently sunburns.  However, this small percentage is still effective in damaging DNA and correspondingly causing burns. Melanin converts UV-B photons into harmless heat with 99.9% effectiveness. Hypothetically, the existence of a plant based chromophore with similar characteristics to melanin in the product may be able to convert an even larger amount of photons into harmless heat, consequently delaying the DNA damage and hence sunburn by some   period.  Our researches have already identified a theoretical biosynthesis melanin pathway. It may account for the product’s apparent defensive role in offsetting DNA damage from UV-B photons as well as antioxidant and anti-inflammatory properties.

The Before and After topical product is derived from the musa plant following bio-botanical cultivation and extraction using a proprietary method for optimizing and preserving natural defensive compounds.
In the event that the “Before” method fails to prevent burns through insufficient amounts or frequency of applications, there is the back-up option of the “after sun” approach. Generous applications of the topical gel provides immediate soothing of the sunburns and absorbs quickly into the epidermal tissues to effect a defense barrier against further damage and assist in the recovery of healthy skin.  The products antioxidant power and anti-inflammatory compounds also help support the natural healing process.

Although radiation therapy techniques have improved recently, skin damage still results from this treatment for a majority of patients. Radiation dermatitis is an acute reaction to radiation therapy and occurs as a mild rash in some cases and skin ulceration in others. The results are varying degrees of pain,
burning and discomfort, the severity of which may render continuation of treatment to be reassessed. The impact of therapeutic side effects of this kind is experienced over prolonged time periods.  Acute skin effects may be observed up to ninety days after radiation treatment begins.  Within hours erythema (redness) may appear and fade fairly quickly. More sustained erythema may last up to four weeks. The National Cancer Institute (NCI) grades the severity of radiation dermatitis over four levels.

CellQuest Topical is reported by many persons undergoing radiation therapy to prevent ionized radiation burns when applied to the impacted skin areas for during several days before radiation treatment. It is also reported to help soothe and rapidly repair burns caused by radiation therapy. Oncologists at Moffitt Cancer South in Tampa, Florida approached the company to conduct pilot clinical tests on breast and head and neck cancer patients to investigate radiation dermatitis avoidance potential. Eventually, the joint Institutional Review Board for both Moffitt and the University of South Florida insisted on CellQuest making a drug application to the FDA as a condition for proceeding. The company viewed this as a conflict with CellQuest’s natural medicine philosophy; consequently the tests were not carried out.  Several customers continue to report benefits in this regard, but the company is prohibited from making specific claims for the product.